I originally wrote a version of this post on stockopedia.co.uk but thought worth re-jigging it on here to incorporate some further research and thoughts into one place.

Avanti (AVN.L) is a communications company operating satellites providing internet capacity to users who don’t have access to regular high speed internet capacity via broadband. Currently they have 4 operational satellites (ARTEMIS, HYLAS 1, HYLAS 2, HYLAS 2-B) with plans to launch 2 more in 2017 (HYLAS 3 & HYLAS 4).

Launching satellites is a capital intensive business. You spend hundreds of millions of dollars getting them into space with the expectation that they pay for themselves many times over in their c.15 year useful lifetime. The capital intensity combined with the long payback period makes Avanti a high risk investment. If the geographic areas they covered were to receive broadband access of high speed mobile internet then the demand for their services would decline rapidly or face severe pricing pressures. The investment case for Avanti very much depends on how rapidly they can sell their satellite capacity while retaining premium pricing. Any analysis of the company should focus on these factors.

They have been heavily loss making so far but promise rapid growth that will deliver profitability to the company in the future:

In order to judge their success we need to look at what are their sources of revenue. These are my understanding of the main categories of Avanti’s sales in order of declining quality:

It would be great to be able to separate out the revenue and costs associated with data sales and equipment sales and analyse these separately but as far as I can tell Avanti have not provided these consistently. In the 2014 Annual Report they do break revenue out into $16.6m of equipment sales out of $65.6m total. They did the same in 2013 but in the 2015 Annual Report they only break out the $25.1m Spectrum ‘sales’. Also you have to read the notes to the Annual Reports to see these. They don’t seem to be broken out in the half year results or in the results RNS’s. Hence the analysis that follows excludes the non-cash sales of Spectrum Rights but assumes all other revenue is recurring. 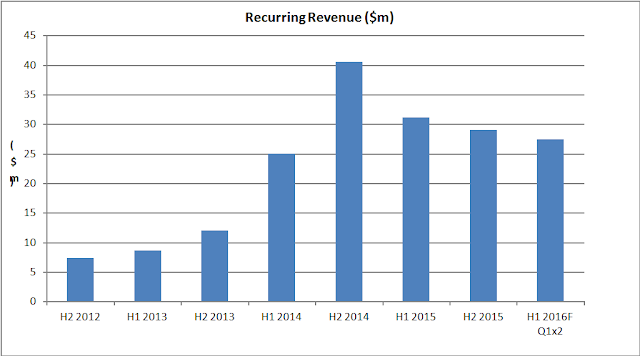 This sort of drop off in revenue can mean one of two things. Either customers are using less of £AVN ’s services, or they are paying less for them.

Not that you’d be able to see this revenue drop if you read Avanti’s management commentary. By careful choice of comparatives, last quarter vs same quarter in the previous year, and including exceptionals in the reporting period and excluding them in the comparative period they have managed to give the appearance of rapid revenue growth in a period when revenue has been dropping half on half:

Let’s look at some of the comments relating to utilization and pricing:

‘This was lower than Avanti's prevailing run rate of growth, due to a larger amount of equipment and government revenue in the previous year, which, although recurring, tends to be recognised on a non-linear basis.’ Q1 2016 Trading Statement

Based on these comments I’ve added estimate of the utilisation to the revenue graph: 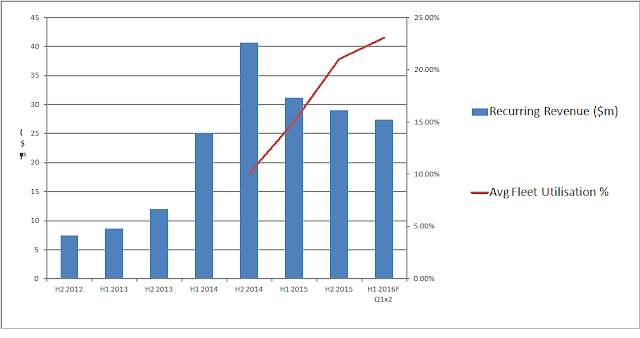 So it seems that data rates are stable but customers are paying less for £AVN’s equipment or value added services meaning that rapidly increasing utilisation is not turning into increasing revenue.

So if we are conservative and assume that Q1 2016 had very little equipment sales and was mostly data revenue what is interesting is to scale up the Q1 2016 revenue to get the maximum theoretical revenue at full utilisation as Avanti suggest we do in their 2015 annual report:

If we take 23% as ‘the upper end of the 20% to 25% range’ then based on the Q1 2016 revenue of $13.6m at the current pricing the maximum theoretical revenue of the existing satellites is $238m a year.
So how fixed are those costs? The accounts split costs into 3 categories:
1.   ‘Satellite Depreciation’ we will ignore for now as a non-cash cost.

2.   Operating Expenses do appear to be largely fixed costs running at $35m pa for the last couple of years. If anything these will increase slightly as Avanti state ‘There will be a modest increase in costs in 2016 as further investments are made in sales and marketing and ground operations ahead of the launches of HYLAS 3 and HYLAS 4.’ Annual Report 2015

3.     Cost of Sales however do not appear to be fixed as an absolute value but as a percentage of revenue of c.60%. I had expected the gross margin to increase as data sales made up a greater proportion of revenue however there is little sign of this in the numbers. Given that COS as a % of revenue are around 60% when revenue is $7m or $40m then it would seem a reasonable figure to take for COS as a percentage of $238m revenue = $143m. 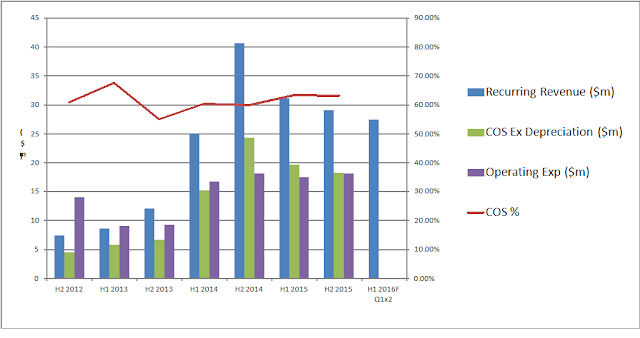 So at full utilisation the current satellites will generate OCF of $238m – $143m – $35m = $60m.
However Avanti has c.$640m of debt accruing interest at 10%pa = $64m/year interest which means even at full utilisation the current satellites would generate a cash loss of $4m/year. Given these sums it is somewhat surprising that the Avanti share price reacted positively to the Q1 2016 results, although it has since fallen back to below previous levels.

Avanti have $219m of cash on hand so can manage an extended period of high negative cash flow however the majority of that cash is committed to the development and launch costs of HYLAS 3 & 4. This means that although I don’t think the committed cash should be included in a valuation it is also wrong to exclude the future potential revenue from HYLAS 3 & 4 when they are launched in 2017.
In order to work out what the impact of the valuation implied by the $13.7m Q1 revenue and 'upper end of the 20% to 25% range’ for utilisation we need an NPV. To do this we always need to make some assumptions, here are mine:

1.      As previously stated Avanti don’t consistently break out data revenue and equipment revenue so I have to assume that these move roughly in step.

2.     Maximum Revenue is assumed to be proportional to capacity in GHz with ARTEMIS, HYLAS 1 & HYLAS 2 adding up to the $238m current max revenue at full utilisation. The revenue capacity of HYLAS 2-B, HYLAS 3 & HYLAS 4 are proportional to their capacity.

3.     Avanti depreciate satellites over 15 years which is meant to be there useful life. Therefore I assume they generate no revenue 16 years after launch. This looks like: 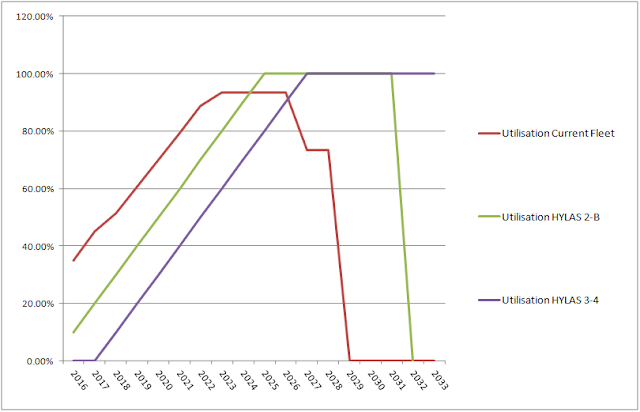 An NPV is only as good as its assumptions of course but with these (that could be considered aggressive in some areas e.g. 10% discount factor when the debt is yielding 10%, they are funding with debt & equity and equity holders are taking more risk) yields an NPV10 of only $480m – considerably less than the outstanding debt:

With the current 182p share price you have a market cap of c.$400m and an EV post capex of c$1.0b vs a $480m valuation.
Of course this analysis ignores revenue from any future satellites Avanti may develop & launch. The reason is that these would have to be funded via further debt and/or equity. In lieu of this I have excluded satellite depreciation. With these assumptions Avanti would be FCF positive in 2019 however not earnings positive until 2021 or later with depreciation charged to the income statement. Note that the senior secured notes are due in 2019. Since Avanti will not be able to repay these from cash flow they will be reliant on credit markets at the time to refinance this debt.

Assuming they can increase the utilisation more rapidly at 20% pa to reach full capacity then the NPV10 increases to c$840m. More than the debt but still makes the equity significantly overvalued. Add in an extended life of each the satellites for 5 years at full capacity in addition to the rapid utilisation and you still get an NPV10 at a discount to current EV.
In conclusion, unless Avanti can rapidly increase capacity utilisation much faster than they have done in the past or if they can generate significantly higher pricing & margins then the equity could well be worthless. That Avanti’s management seems to prefer finding creative ways of giving the appearance of growth in their commentary rather than actually driving the business to create this growth, gives me little confidence that they will deliver improved growth or margins in the future.

Disclosure: Since the current equity valuation seems to be pricing highly optimistic scenarios for both pricing and utilisation that I believe to be unrealistic based on the performance of the company over the past 2 years I am currently short the equity.
Posted by dangercapital at 11:59

dangercapital
I am A UK-based long-short value investor.