Flybe – A dog is a value investor’s best friend?

I think there is one thing we can all agree on – no one has much love for Flybe (FLYB.L). Even after a recent small bounce it has lost almost 50% of its value over the last year and is now trading at a PTBV of just 0.8 and an EV/EBITDA of 1.4.

And many would say that’s fully justified. For example a few comments from here:

‘The real killer for me is these persistently low level load rates despite the generally favourable conditions for air travel.’

‘They must surely be near rock bottom on load factors. Generally when LF's get to 65% is frequently game over for an airline.’

‘Also, if they barely make money with low oil prices & the economy moving along nicely, what happens when we have a recession linked to high oil prices?’

‘Anyone short or considering shorting here?’

‘However, for me this is one disappointment too many, and I'm currently in the process of ditching my position in the company today. The load factor dropping to 70% is worrying me, and I think it's possible that this company may never move back into proper profitability.’

Here’s the main reason for being bearish in 1 graph: 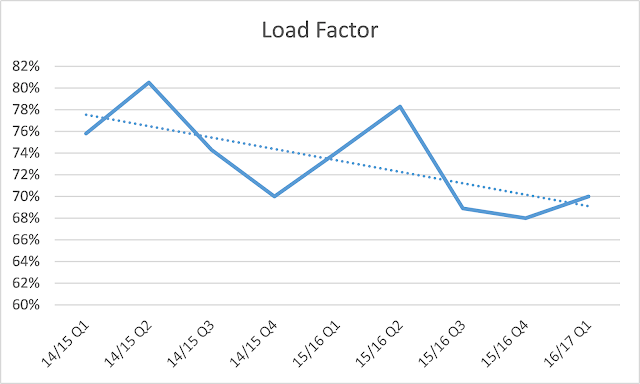 Load factor is passenger numbers divided by seat capacity. This doesn’t look like the turnaround story investors were promised. It can be hard to make money when your average plane is less than 70% full.

Things are unlikely to change soon either early indications for Q2 in the Q1 trading statement indicate that there is a risk that H1 won’t be significantly above break even.

And after all this is to be expected, Warren Buffett has given us repeated warnings against owning an airline:

"I like to think that if I'd been at Kitty Hawk in 1903 when Orville Wright took off, I would have been farsighted enough, and public-spirited enough--I owed this to future capitalists--to shoot him down. I mean, Karl Marx couldn't have done as much damage to capitalists as Orville did."

So that’s that then. £FLYB is a dog and best avoided…Or is it?

Flybe popped up on my radar again when it appeared as the highest risk-reward & ROOIC pick for a value investing Hedge Fund:

When smart value investors suggest a 10x upside then I certainly start to take notice.

Essentially their argument is:

Now a lot of that makes sense but on the surface doesn’t seem to line up with the story that the load factor graph is telling us. However when you graph the components of the load factor separately and apply a trend line to help remove seasonality you get a different story: 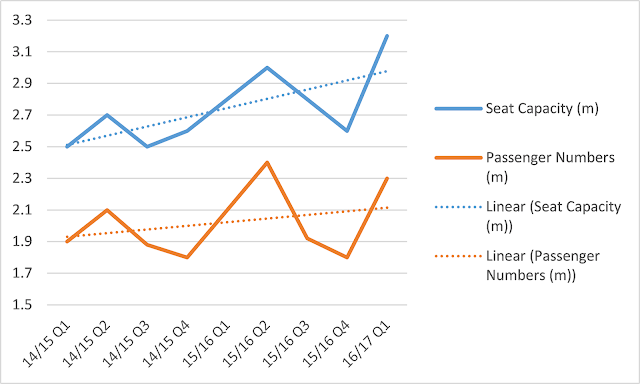 So the load factor decline is due to passenger numbers increasing at a slower rate than the seat capacity increase. According to the CEO this is as expected since a new route takes 2 years to develop the volume to become profitable and the company has added seat capacity recently.

We can actually model the lag in passenger numbers following an increase in seat capacity. Taking the Q1 figures to avoid seasonality I am going to assume a route starts at 55% load factor when opened and then hits 65% after 1 year and 75% after 2 years. I assume mature existing routes stay at 75% load factor. This is what you get when I model this against past Q1 numbers (to avoid seasonality effects I compare just Q1 to Q1):

i.e. a return to a 75% load factor 2 years after seat capacity growth stops.

Of course this model doesn’t prove that growth in seat capacity is the sole reason for the drop in load factor but does give some confidence that it is at least part of the explanation.

The reality is also more complex since there is a strong relationship between load factor & yield (revenue per passenger.) There is high price elasticity meaning that small changes in pricing have big impacts on passenger numbers. The company will adjust pricing to maximise revenue per flight just this revenue will be bigger for more mature routes that need less marketing for public awareness and get scale from airports.

Flybe is very low on multiples of EBIT, EBITDA & EBITDAR compared to its peers and with those metrics likely to increase in the future they will look even better comparative value unless the share price responds. However in general I’m not a big fan of sector multiple comparisons when valuing a business since the whole market or sector could be under/over-valued or there may be differences in tax rate etc. that are not properly accounted for. For this reason I prefer to value businesses on a Discounted Cash Flow basis. It is clear that a DCF is at best an attempt to understand the factors influencing intrinsic value not a way of determining an absolute value. They are equally as dependent on assumptions as sector multiple comparisons but at least the assumptions are explicit and can be tested or varied as required. Here I am going to make some pretty conservative assumptions. 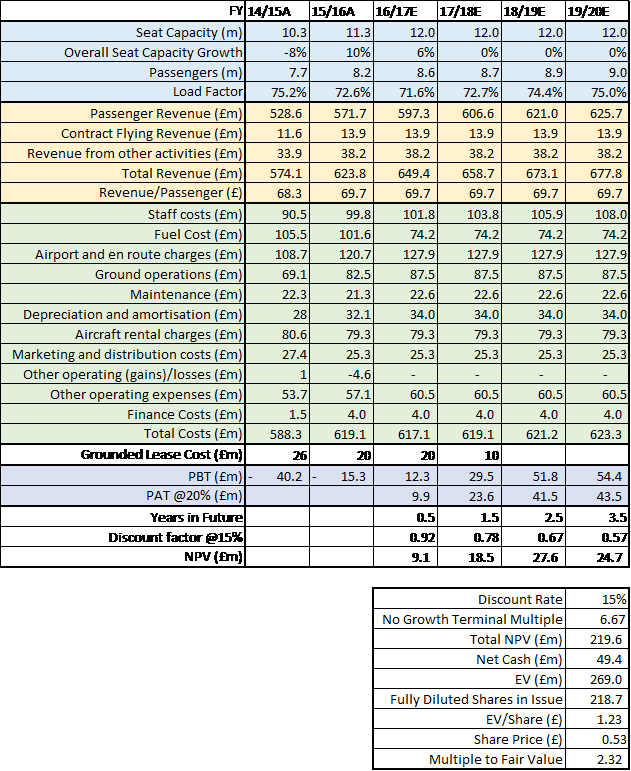 This gives a fair value estimate of £1.23 or 2.3x current share price even after the recent rise from sub 40p to the current 53p.

A less conservative discount rate of 10% and hence 10x final multiple would see a fair value estimate of £1.88 or 3.6x current share price.

This is based on a management team doing the basics of running an airline right: scheduling, pricing utilisation but not much else. If we assumed that the CEO can actually do what he says and add further profitable routes to the network, oil price stays low & revenue/passenger increases slightly then 10x share price is not unreasonable.

Obviously reality will not match my model of smooth growth. Each quarter, half or year will be noisy as external factors like fuel pricing or consumer confidence provide head-winds or tail-winds. With net cash on the balance sheet though Flybe has the ability to weather these periods of poor trading and capitalise on the periods of good trading.

I see three major risks to the type of upside I am modelling here. The first is a long severe recession in the UK that would seriously impact passenger numbers across the industry for an extended period. This was certainly a risk with the Brexit vote however PMI indicators seem to have bounced back recently. I am actually surprised at the apparent strength of the UK economy in the wake of the Brexit decision. Flybe has significant economic exposure but given its higher proportion of business travel than most other low cost carriers it is much less impacted to weak sterling reducing leisure travel that could be a challenge for other low cost carriers. And of course if you were concerned about the severe recession scenario you would own no UK stocks. The second risk is another cash-rich airline competing aggressively on the shorter regional routes that Flybe fly. Unless this competitor is willing to fly Q400 or similar aircraft Flybe will have the cost advantage but as Warren Buffet alludes to we shouldn’t underestimate the willingness of airlines to burn shareholders capital on unprofitable route expansion. I think the risk of an airline competing across a large proportion of Flybe’s routes is limited by the fact that it would be cheaper to simply buy Flybe. Which is my third risk. That someone else runs these numbers and Flybe gets taken over for less than a conservative estimate of its intrinsic value.

All things considered I’m struggling to find a better risk/reward situation in the UK market at the moment. At least for investors willing to live with the volatility of short-term results.

Disclosure: Since my analysis indicates a very significant potential upside to Flybe shares I am long the equity. I may be wrong. I reserve the right to change my mind at any time if I perceive the facts have changed.
Posted by dangercapital at 10:49 6 comments:

dangercapital
I am A UK-based long-short value investor.